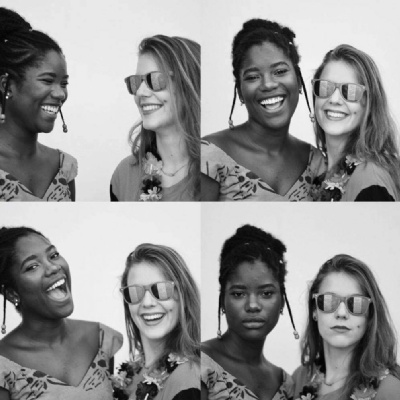 Elinor and M’mah left Belgium with the same plane and the same plan to go and study for two years at UWC Costa Rica. Talking with these two bubbly and bright young women makes you feel that the journey they shared has made them grow and mature in many ways and created a warm bond between them. Read more about their experiences at UWC, how they grew, got challenged and learnt, and what their next adventure looks like, below!

How did you both had the idea to apply for a UWC scholarship?
M’mah: I am part of a movement called Boost that helps young people with their school career and personal development. When I was in fifth grade, I once told my coach that I wanted to live an adventure and study abroad. When she told me about UWC, I knew that was exactly what I wanted. There were only three days left to submit my application. While others take weeks to prepare for it, I wanted to participate so badly that I managed to get everything ready in such a short time.

Elinor: I heard from a friend at school that she was leaving for a UWC college. When I understood what it was, I decided that I was going to do that too. As a matter of fact, you cannot decide for yourself, but you have to be selected, so when I told my parents and my friends about my plan, no one believed it. But for me, it was decided, and indeed I got through the selection. I was longing to meet different people. At UWC, you do meet very different people, and even more so, diversity is celebrated there, while in Belgium it often has a negative connotation. At my school in Belgium, everyone was more or less the same and only later, after high school, they started to go different ways and diversify.

M’mah: I also very much enjoyed the diversity at UWC. There I felt I could celebrate more my Africanness. I was born in Guinea and came to Belgium when I was nine. I represented UWC Belgium in Costa Rica, but there I learnt that being Belgian and being African does not exclude one another. Nationality is only one element of our identity. We are so much more. At UWC, your identity becomes richer. You add another layer to your identity.

Elinor: I have a very similar experience. I always went to school in Dutch, while at home we speak mainly French. For me, Dutch was a language that was imposed on me and I never really felt at home in that language, even if I have Dutch-speaking family too. When I was at UWC Costa Rica, for the first time I met people I really liked and with whom I spoke Dutch, so suddenly it was a plus indeed to know Dutch and I started to enjoy speaking it. Now I am a happy bilingual person and my Dutch-speaking grandmother is very pleased about that change.

At UWC, you are designated by a national committee, and regularly you are supposed to represent the country that sends you. How do you feel about representing Belgium?
M’mah: I must say that it felt very positive to be there representing Belgium. In general, when I travel, I notice that people often don’t know Belgium. But at UWC Costa Rica, the Belgians have a big place in the community and are well respected. Thanks to the Belgian students before us, we were able to be Belgian and build further on our good reputation. Belgium was a known place and was talked about.

Elinor: One Chinese student told me that he had never heard about Belgium until he came to UWC Costa Rica. In fact, he told me, he still did not entirely believe it was a country.

M’mah: A country that continues functioning without a government ...

Elinor: And that rocked the local Eurovision evening with our version of Stromae’s song ‘Papaoutai’!

M’mah: But nationality is just one part of your identity. At UWC, you develop many more aspects of yourself. Once we were there, we both developed our own contacts depending on many different interests we both have. We arrived as friends, because we had been preparing our trip together, so we got to know each other before we arrived. Once we were there, we often went separate ways, but we always had each other to fall back on.

Elinor: We actually did very similar things, only in parallel. I was ‘mama Europa’, the coordinator of European cultural events.

M’mah: And I was ‘mama Africa’, the coordinator of African cultural events.

Elinor: We both were in the French community, and I was also in the Dutch community, even if technically I am not Dutch.

M’mah: We also had some classes together, like Spanish.

Elinor: Oh yes, our Spanish classes! (both burst out in laughter)

M’mah: We were always sitting together, the two best students of the class, because we both had Latin in Belgium, and Spanish is similar in many ways. Our comments and our jokes drove the teacher nuts!

Did all these new experiences change your view on Belgium?
M’mah: When you are there, you don’t feel that you are changing, but once back, you feel how much you have changed.

Elinor: That’s what they call a reverse culture shock.

M’mah: You have to get used again to the world outside the UWC bubble. At UWC everything is very intense and when I came back, I had to get used to holding back a bit with my fellow students at Saint Louis.

Is that not a step backwards?
M’mah: No, because you don’t lose what you have gained at UWC. You have gained an extra layer to your identity. But it is also part of the skills that UWC gives you to be able to adapt to other people, so you can connect.

Elinor: I did not have such adaptation problems after UWC, because I went studying in Maastricht, where there is more diversity. But I did change my perception about Belgium on one important point: colonisation. In Belgium, this topic is still quite taboo. At my school, it was never talked about. At UWC Costa Rica, the context is very different, and it is a very important debate, especially in my course on global politics. You have people there from all over the world, and you are not protected by your usual bubble of white Belgians who often justify king Leopold II by saying that he did so many good things and built beautiful buildings in Brussels, while they don’t think about the things that he has done to other people.

M’mah: For me, this topic was not new, because of my own family history. Also, Elinor left Belgium after her 4th year, while I left after my 5th year of high school, and colonisation was part of the school programme during that year. But I agree it does not get the attention it should get at school. For me, it is a topic of similar importance as the Second World War. Schools often organise school trips to raise awareness about what happened during that war, and something similar could be done to raise more awareness about what colonialism did to people. For me, it is shocking to see the statue of Leopold II still standing at place du Trône, while most Belgians don’t see a problem with that. I was glad we were finally having that conversation at UWC.

Elinor: Indeed, this is not just something from the past. I now realise all the things that are not being done in Belgium and that still could be done to do justice to the people who suffered from the colonial regime, like returning art to where it was taken away, or returning human remains for a start.

M’mah: You see, this conversation starts to resemble a typical lunch break conversation at UWC! Life at
UWC is constantly thought-provoking.

For both of you, going to UWC Costa Rica was a dream come true. Do you have another dream after this experience?

Elinor: I am fascinated by the EU. This feels natural after UWC, because they both value diversity and try to make it a strength. For that reason I chose to study at Maastricht, where so many students dream of working for the European Union in one way or another, and we have many courses about it.

M’mah: I am studying Political Science in Brussels and I discovered that I really like journalism. I create online content for Team Harmony Foundation's online web series called: "Hate : What are you going to do?" And a few months before I started working with team harmony, I wrote an article for La Libre Belgique through a writing workshop. I hope to develop those activities further.